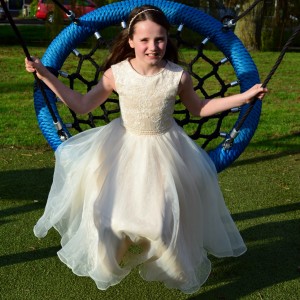 Amira Willighagen (11), who became world famous at the age of 9 with her opera arias, and was the winner of the RTL-show Holland’s Got Talent, decided that she wanted to help others using her vocal talents. In March 2014 she financed and opened a playground in the South African township Ikageng, so that the children there would be able to grow up with more luck and in more happiness.

Today, at Mandela Day, Amira -supported by her charity foundation Stichting Gelukskinders and with the generous help of the North West University in Potchefstroom (South Africa)- has organized that her first playground -which attracts hundreds of children on a daily basis- gets some maintenance and a fresh layer of paint.

Later this year, a second playground will be built. This time at a school where the children of farm workers get their primary education. The school’s also situated in the South African North-west Province.