On Monday August 1st Amira -together with Board members of her Gelukskinders foundation- opened her second playground in South Africa. The playground is situated at Lesego Public Primary School in Ikageng, the township where  Amira also opened her first playground in 2014.

In the video, school principal Pule Seroalo holds a short introduction speech, and Amira is being introduced by Hannes Malan of the North West University in Potchefstroom, and South Africa-based team member of Stichting Gelukskinders.
Amira thanks principal Seroalo, his staff, and the people of Jolly Jungle Gyms who have built this playground.

Lesego Public Primary School is a primary school in Ikageng with about 900 learners. The playground from Gelukskinders is received ‘with open arms’, because the school was only equipped with a few old and worn-out toys, which is not enough for all children to play. “Often, children leave school during class and walk 1 kilometer to Amira Park, to play there. We spend a lot of time to go over to Amira Park, collect the children and return them to school” -according to Pule Seroalo. 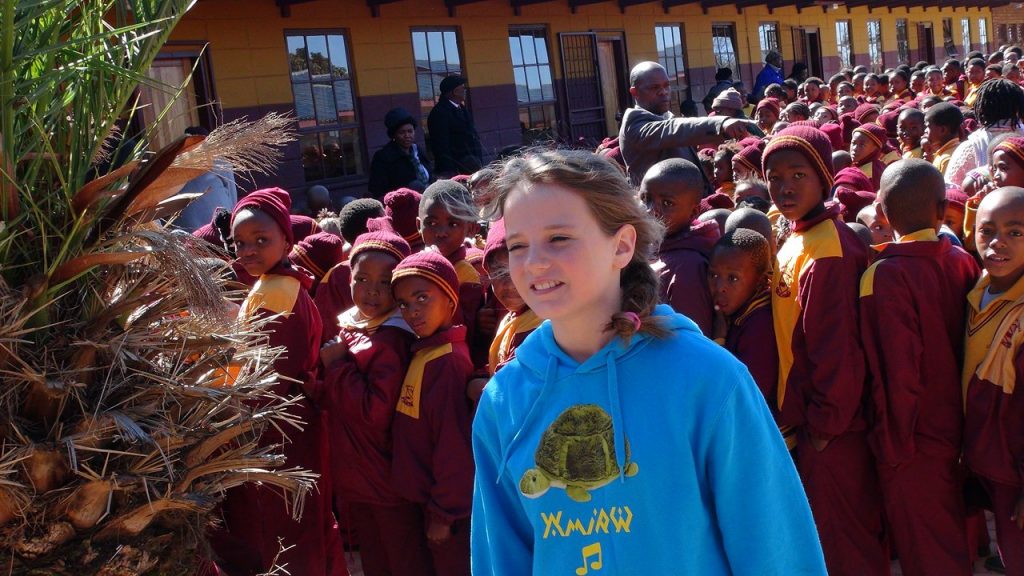 The opening of Amira’s second playground is also part of a video report made by Kyknet TV for their TV program Kwêla, which was broadcast on august 10th. Gelukskinders is waiting for permission to share this video report via our web site.

During our visit to South Africa, the question was asked why these 2 playgrounds were built at a so short distance from each other, while the country is so big. Well, the townships of South Africa are in need of thousands of playgrounds. Gelukskinders is a small organization which is depending on a handful of volunteers. The choice to build 2 playgrounds on a short distance allows us -together with the people who help us locally- to keep an overview and to ensure the durability of the playgrounds.