Last weekend Amira performed in Belgium for the first time during the dinner-party Italia canta Italia, which was organized in the Meerlaer Castle in Laardal.

During this concert, some new and unique collaborations were demonstrated. 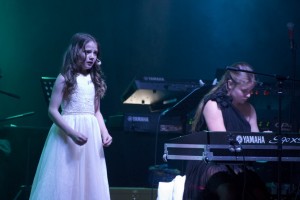 Amira performed for the first time together with pianist / composer / singer Anne Keizer, who participated in 2012 in the RTL-program The Voice Kids at the age of 12. It’s obvious that two natural talents have found each other here, After only one rehearsal / soundcheck the ladies performed Caccini’s Ave Maria.

Besides the nice collaboration with Anne, and after singing a few songs solo, Amira also performed together with Nicola Vigna, an Italian singer who lives in Belgium. Together with him, she sung Con te partiro. Initially this was not planned; Nicola was only to perform on the first evening, but after hearing Amira sing, he cancelled his appointments to be able to return the second night and sing a duet with her.

After the performance, some CDs were signed and sold for Stichting Gelukskinders.