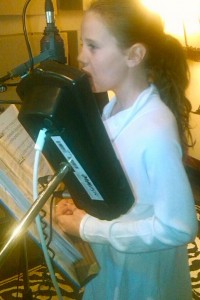 Last week Amira has been working hard on recording her second CD. The new album, which is the successor of her debut album Amira which was released in March 2014, will probably be available in November.

Amira won’t tell how many, and which songs will be released on her new album. Of course fans already have started speculating about this anyway. Also, the title of the new album remains unknown. According to the young singer, they’re currently looking for a suitable name.