Talk about being just in time…

The workers had just about finished their jobs when Amira and Fincent arrived.

And the cement had not yet dried! 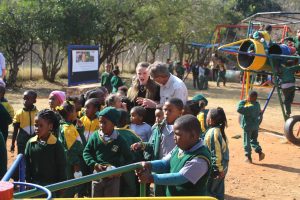 The pupils and teachers were very excited: especially the headmaster.

They were happy to see Amira again – with another gift from her foundation: four large blackboards, placed outside in between the existing playground equipment.

During the past year, the foundation, in co-operation with the play equipment manufacturer Jolly Jungle Gyms, has made it possible to expand the playground that was opened last year (in June 2017). And Gelukskinders has also had a new fence installed around the playground.

For the youngest children, a separate playground was installed, where the blackboards are placed now.

And so they would have the privilege of experiencing the festivities up close. The impatience shone from their faces.

But first, they had to wait nicely for the speeches to be finished. And the Headmaster, Mr. Adams, surely knew how to make a speech! His words reflected the joy and wonder about what Amira and her foundation had already achieved. He was also surprised by the delegation that had travelled all the way to South Africa: “Where are you all from? Really?” he asked.

The school staff had a present for Amira, made together with some of the pupils. They handed her a nice photo collage, which Amira gladly accepted. 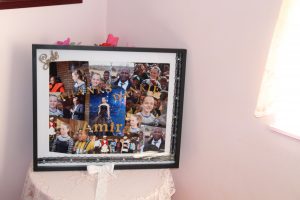 In her speech, Amira stated how happy she was to be able to do all this for the children. She also specifically thanked all those who had sponsored and made donations to support her foundation. She said, “None of this would have been possible without you”.

Of course, Amira couldn’t leave without singing a song or two… so “Nessun Dorma” and “O Sole Mio” soon sounded through the microphone and speakers.

Once children are ‘released’ something happens, I can tell you!

They were told beforehand that they were not allowed to draw on the blackboards yet, because the cement had to dry first. Sure!

Children soon surrounded and embraced her… and not just Amira, but the whole delegation was included.

It was wonderful to see the children enjoying drawing and playing. The photos show what an event this was.

Then it was time to relax with sweets (candy) and drinks. There were a lot more cups this time: three tables full — all of them nicely decorated by Amira, with a little help from others. What a lot of cups!

The teachers had their hands full to keep the children in check. So we also took some sweets to the playground.

The pouring out of the lemonade and handing out of the sweets was held up a little. Amira thinks these are delicious too, you know!

While the children flooded the playground, it was time for the delegation to retreat.

The school had provided snacks and drinks, which were gratefully enjoyed.

What else could you want?! 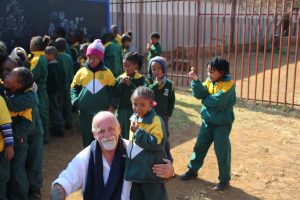 The foundation has big plans for next year. Gelukskinders will have existed 5 years by then. That is worthy of another playground or two, we think.

The Board of Gelukskinders wishes to thank all its sponsors and donors for their support, which makes it possible for Amira to fulfil her dream. 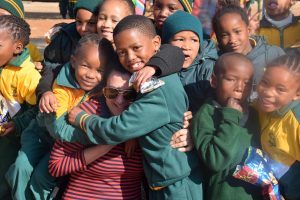 WE WILL KEEP BUILDING PLAYGROUNDS!